This page contains everything we know so far about COVID-19, and a timeline of the REC's response to the coronavirus.

REC has been appointed as one of the Government's Business Representative Organisations to support the national response to Coronavirus, ensuring that recruitment's voice is heard in the key debates. We'll be taking your questions and feedback directly to Ministers. Queries can be sent to info@rec.uk.com

The Prime Minister has today set out the government’s “Living with Covid” strategy. The plan was based on 4 principles:

From Thursday 24 February, the legal requirement to self-isolate will end. With this, self-isolation support payments will also come to an end, but covid provisions for statutory sick pay can still be claimed for a further month. The legal requirement for those unvaccinated self-contacts to self-isolate will also come to an end. Until 1 April, anyone testing positive should stay at home, but after that, “it will be down to personal responsibility just as with flu.”

From today, government is removing guidance for staff and students in most educational settings to undertake twice weekly asymptomatic testing. From 1 April, free symptomatic and asymptomatic testing for the general public will end, although it will be kept in place for older age groups and those most vulnerable to Covid-19.

The government will continue to work with devolved administrations as they take forward their own plans. 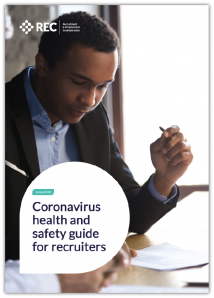 As some of the earlier lockdown measures are eased and businesses and organisations are returning to work, there many questions about how to manage health and safety issues relating to coronavirus. The government is producing regularly updated guidance. This guide covers many of the questions relating to health and safety and includes links to useful resources.

We've curated over 35 hours of webinars and podcasts featuring industry experts to bring you the big business lessons COVID-19 has taught us. Get your free copy of the digital guide here.

What you need to know

Everything we know so far about the impact of coronavirus on the recruitment industry.

COVID-19: Podcast, webinars and resources to support your business

Hear the latest from our policy, legal and research experts, plus our network of recruitment industry leaders and trusted partners.

Get the latest information affecting recruiters within the education, healthcare and construction sectors - and find out about REC work at a regional level.

COVID-19: It's time to protect jobs

Our four priorities when working in partnership with Government.

Planning ahead: Redefining your strategy for resilience