Our Council and governance

The Council oversees the work of the REC's Chief Executive and Executive Committee.

It was recently agreed by membership vote for the REC to change its governance structures to meet the future needs of our dynamic and professional recruitment industry.

This page sets out how the current Council is set up, and how we will make changes in 2020.

The Council oversees the work of the REC's Chief Executive and Executive Committee.

It was recently agreed by membership vote for the REC to change its governance structures to meet the future needs of our dynamic and professional recruitment industry.

This page sets out how the current Council is set up, and how we will make changes in 2020.

Changes to the REC governance structure

At the December 2019 Council meeting of the REC and via a vote, it was agreed that the current Council no longer fits with the new direction the organisation was undertaking. It was agreed to move from a council structure of over 30 individuals, all elected from the REC membership, to a more skill-specific Board of 11, supported by specialist Governance Committees.

It was agreed that this new structure would continue to include some REC members but also individuals from outside the recruitment industry. It was also a stated aim to bring diversity to the governance of the REC.

Following this decision, the REC scheduled a physical EGM in April, but this had to be cancelled due to the Covid-19 outbreak and was replaced with a virtual EGM on May 21.

At the EGM, it was agreed to continue with our plans for reforming our governance structure – but that due to the Covid-19 crisis we would take some time to achieve it, and that we should avoid changes of non-executive leadership at this vital period.

At the EGM, therefore, REC members were asked to grant the Council the power to implement the proposed changes to the REC’s Governance structure at a later date, once the emergency period has passed.

REC members were also asked to approve an extension in the terms of current REC non-executive office holders until such time as effective election and appointment processes can be held.

In both cases, these extended periods should not be excessive, and will mirror the good governance approach taken by other organisations who have made the same step – keeping experienced Directors onboard as we navigate this difficult time.

The proposals put to the EGM were:

These proposals were approved on 21 May.

As we move into the next phase of Covid-19 in the UK, it has now been agreed by the REC Council to move forward with its exciting governance reform programme. We aim to complete this change by October 2020.

Please note the application process for the REC board and governance committees is now closed.

The new REC Board

The role of the Board is to act as the key forum for guidance to the REC on purpose, product offerings, market changes and intelligence.

The REC appoints non-executive directors to its Board to provide independence, impartiality and expertise.

The REC Board will elect one of its members to be the Chair, who may serve in that role for a single term of three years. The Chair must be a member of the REC.

Our board is guided by recommendations from four committees.

The Remuneration and Appointments Committee oversees appointments, performance and remuneration policy in relation to the Board, non-executives and staff of the REC; it makes recommendations to the Board on these matters.

The role of the Audit and Risk Committee is to provide external advice and expertise to inform the REC management of risk and audit, providing advice to the management team.

REC members who serve on the Audit and Risk Committee carry the same responsibilities and are able to bring their sector perspective to the work of the Committee.

The REC Council has delegated authority to the Professional Standards Committee (PSC) to consider complaints and evidence of non-compliance with respect of the REC Codes by any REC member.

The PSC can also impose disciplinary sanctions against those investigated.

The PSC has full power to investigate complaints against members in whatever manner it deems appropriate.

Find out more about making a complaint and the investigation process.

The REC’s Employment Policy Committee is a forum for REC members to review government policy, its impact on recruitment businesses and inform the campaign priorities of the REC.  Stakeholders from government and public policy are regularly invited to join meetings of this committee to present updates and hear feedback from members.

Membership of the committee is only open to REC members.

The committee meets quarterly, either in person or virtually.

For more information and to get involved as an REC member, please contact policy@rec.uk.com

Please note the application process for the REC board and governance committees is now closed. 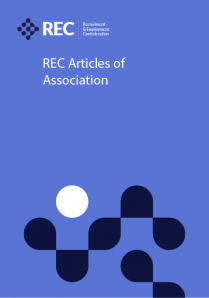 REC Members can download the full REC Articles of Association, covering the rules around membership and our governance structure.

These Articles were approved at the AGM on 24 June.

Working at the REC